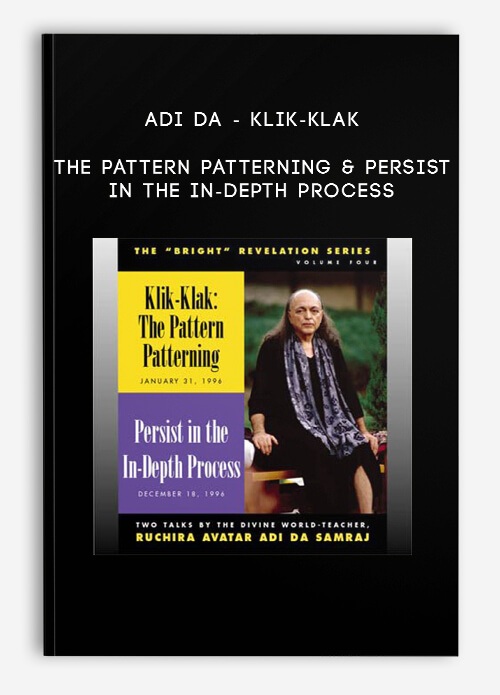 It is not that you are great—Reality is Great, the Divine is Great. It is Eternal. It is the Condition of conditions. It is That in Which everything is arising. It can only be Realized by transcending any particular condition, form, or ego-“I”. If It is Realized, then Reality is Realized, and the Very Nature of Reality is Realized (Which is Free and All-Love-Bliss).

Talk One: “Klik-Klak: The Pattern Patterning”
Avatar Adi Da elaborates on a key expression in His Wisdom-Teaching, Klik-Klak, which He uses to describe the mass of conditions that are only constantly shifting and replicating patterns, that never manifest any fixed “objects” or “entities”. He explains that the fundamental error of the presumed separate self is the attempt to superimpose the characteristics of Consciousness Itself onto the Klik-Klak realm. Ultimately, we must Realize That Which is Always Already the Case, Prior to the illusion of Klik-Klak.

Talk Two: “Persist in the In-Depth Process”
Avatar Adi Da discusses the accumulated life-patterns that apparently dictate the course of an individuals’ experiences and actions. He examines the fact that bodies are actually “programmed” to die—that they are necessarily finite and mortal appearances. He describes the in-depth process of the devotional relationship to Him, which ultimately Realizes the Divine Depth beyond the body, the mind, and attention.

This Talk was originally published in Drifted in the Deeper Land.

Get Adi Da – Klik-Klak: The Pattern Patterning & Persist in the In-Depth Process with Digitdl.com

Be the first to review “Adi Da – Klik-Klak: The Pattern Patterning & Persist in the In-Depth Process” Cancel reply