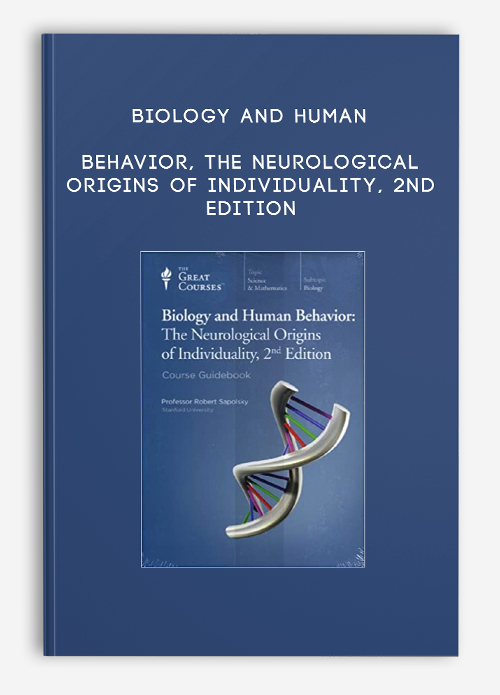 When are we responsible for our own actions, and when are we in the grip of biological forces beyond our control? This intriguing question is the scientific province of behavioral biology, a field that explores interactions among the brain, mind, body, and environment that have a surprising influence on how we behave—from the people we fall in love with, to the intensity of our spiritual lives, to the degree of our aggressive impulses. In short, it is the study of how our brains make us the individuals that we are.
Hide Full Description

Biology and Human Behavior: The Neurological Origins of Individuality, 2nd Edition, is an interdisciplinary approach to this fascinating subject. In 24 lectures, you will investigate how the human brain is sculpted by evolution, constrained or freed by genes, shaped by early experience, modulated by hormones, and otherwise influenced to produce a wide range of behaviors, some of them abnormal. You will see that little can be explained by thinking about any one of these factors alone because some combination of influences is almost always at work.

This course is a newly recorded and much-expanded update of Professor Robert Sapolsky’s original Teaching Company course introduced in 1998, which was lauded as “extremely stimulating” by The American Biology Teacher.

A prominent neurobiologist, zoologist, and MacArthur “genius” grant recipient, Professor Sapolsky is a spellbinding lecturer who is also very entertaining. In a feature story in The New York Times, he was compared to a cross between renowned primatologist Jane Goodall and a borscht belt comedian. An article in the alumni magazine at Stanford University, where he teaches, called him “a man who exudes adrenaline and has a reservoir of intensity deep enough to spin the turbines at Hoover Dam.”

What You Will Learn

The course opens with an introductory lecture and then proceeds to Modules I and II, which start at the level of how a single neuron works. You build upward to examine how millions of neurons in a particular region of the brain operate. The focus is on the regions of the brain most pertinent to emotion and behavior.

Module VI examines ethology, which is the study of the behavior of animals in their natural habitats. The focus in these lectures is on how hormones, evolution, genes, and behavior are extremely sensitive to environment.

Finally, Module VII explores how the various approaches—neurobiology, neuroendocrinology, evolution, genetics, and ethology—help explain an actual set of behaviors, with a particular focus on aggression. The final lecture summarizes what is known about the biology of human behavior and probes the societal implications of having such knowledge.

Insight into Yourself and Others

As you work through this thought-provoking and engaging material, you will learn much about your own behavior, not to mention that of others. One particularly intriguing region of the brain relating to behavior is the frontal cortex, which plays a central role in decision-making, gratification postponement, and other important functions. The frontal cortex is the part of the brain that “makes you do the harder thing,” whether it is concentrating on an unwelcome task, keeping anger under control, or telling a white lie about a spouse’s new haircut. Consider these cases:

What happens when there is essentially no frontal cortex?: Railroad worker Phineas Gage suffered a massive frontal cortical lesion in a serious accident in the 1840s. Overnight, he changed from a sober, conscientious worker to a profane, aggressive, socially inappropriate man who could never regularly work again. The loss of his frontal cortex meant he lost his emotional regulation; he had no means to do the “harder thing.”

The myth of the fully wired, mature young brain is one of the often-heard pieces of misinformation that this course corrects. Other areas where Professor Sapolsky revises widely held beliefs include:

“For the good of the species”: The old notion of group selection has been proven wildly incorrect. This is the idea that animals behave “for the good of the species” and that behaviors are driven by ways to increase the likelihood of the species surviving and multiplying. Evolution is not about animals behaving for the good of the species but, rather, behaving to optimize the number of copies of their own genes to pass on to the next generation.
The inevitability of social structures: Professor Sapolsky’s own fieldwork in Africa has shown that an archetypal male-dominated, aggressive society of baboons can change radically to a tradition of low aggression within a single generation. “If these guys are freed from the central casting roles for them in the anthropology textbooks, we as a species have no excuse to say we have inevitable social structures,” he says.

Cause for Concern and Hope

At the end of the course, Professor Sapolsky explores the implications of our emerging understanding of the origins of individual differences. How much do these insights threaten our own sense of self and individuality? Where do we draw the line between the essence of the person and the biological abnormalities? What counts as being ill? Who is biologically impaired, and who is just different? As more and more subtle abnormalities of neurobiology are understood, how much should we worry about the temptation to label people as “abnormal”? And what happens when we each have a few of these labels?

These and other questions should concern us all. But while Professor Sapolsky sees alarming trends, he also sees cause for hope. We needn’t worry that we are on the verge of unmasking the secret behind everything we do, he says, since we can never explain everything; every answer opens up a dozen new questions. Furthermore, to explain something is not to destroy the capacity to be moved by it. “In the end,” says Professor Sapolsky, “the purpose of science is not to cure us of our sense of mystery and wonder but to constantly reinvent and reinvigorate it.”

Get Biology and Human Behavior, The Neurological Origins of Individuality, 2nd Edition with Digitdl.com

Be the first to review “Biology and Human Behavior, The Neurological Origins of Individuality, 2nd Edition” Cancel reply