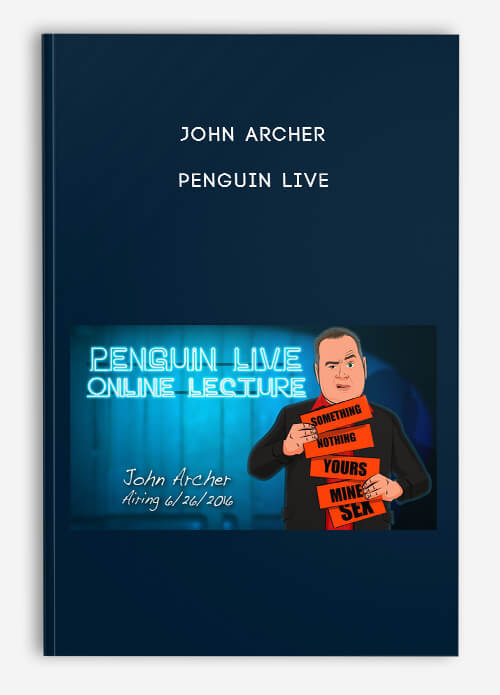 “His reputation in the magic world is among the very best. Hysterically funny, I’d recommend him unreservedly.” – Derren Brown, TV Magician and Psychological Illusionist

“You could put John Archer anywhere and he would kill an audience.” – Penn Jillette, Penn & Teller

“John Archer will blow your mind. He is the Funniest man I know. Seeing him perform is guaranteed to be one of the best experiences of your life!” – Dynamo, Magician Impossible

“Strong magic and great comedy seldom come in the same package. If Eric Morecambe – with an added touch of Les Dawson – had been born a magician, he would have been John Archer.” – John Fisher, Former Head of Entertainment -Thames Television

“John Archer is so funny that it takes you a while to realise that he’s also an outstandingly original and innovative magician. He is the outstanding magical entertainer of his generation.” – Geoffrey Durham, Magician and TV personality

“John Archer is charming, disarming and easy to like.” – The Scotsman, Edinburgh Festival

“John Archer is the exception to the myriad of foul-mouthed, offensive contemporaries. Eschewing political satire and sexist smut, he makes his mark with more traditional throwaway gags, a smidgen of music and teasingly inventive magic tricks.” – The List, Edinburgh Festival
What will he teach?

Pushing the Envelope A clean billet idea using just one billet and one envelope.

John’s Tossed Out Deck Routine A solid funny routine with a versatile move for other effects.

John will also cover comedy scripting and writing tips…
Who is he?

John is a past winner of ‘The Magic Circle Stage Magician of the Year’ and has spent the last 28 years entertaining audiences all over the World with regular tours to entertain British troops serving overseas. He is thought by many to be the best Comedy Magician in the UK today.

He has performed all over the world, including appearances in France, Spain, Denmark, Iceland, Finland, USA, Curacao, Venezuela, South Africa, Japan, Kosovo, Oman, Philippines, Cyprus, Malasia, Afghanistan, Malta, The Falklands and The Seychelles.
If you could ask ONE question to one of the world’s most creative professional magicians, what would it be?

If you’ve never been to a magic lecture, there’s never been a better time. Sunday, June 26th, at 7:00pm, we’re streaming John Archer LIVE in a spectacular 2-hour online lecture. Watch and learn things you won’t find in any book or DVD.

Purchase the John Archer LIVE product. This is your ticket.
On Sunday, June 26th, anytime before 7:00pm Eastern, click the MyPenguinMagic area at the top of the Penguin site. You’ll see the stream appear 1 hour before showtime. At 7pm sharp, John will hit the stage and begin his JAM-PACKED professional lecture.
Sit back and watch over 2 hours of DVD-quality streaming magic from the comfort of your own home.

This lecture is for everyone, from the beginner to the professional and for magicians and mentalists alike. Dont miss it!