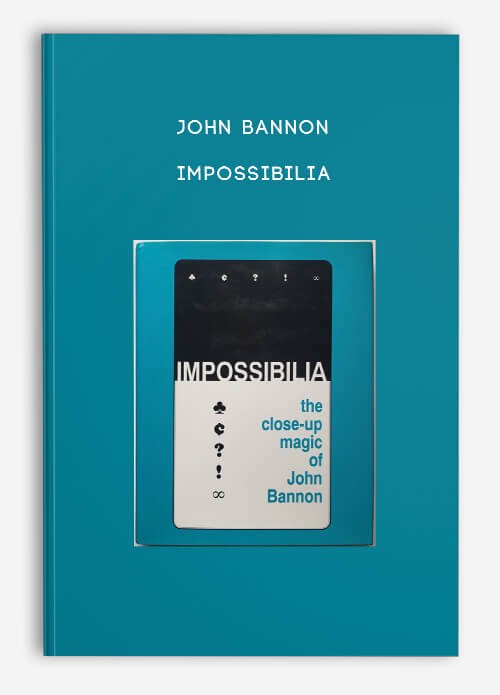 John Bannon is one of the most popular creators of close-up magic and his routines are regularly used by most professional and hobbyist magicians. If you don’t have a John Bannon routine in your repertoire you are missing out on direct, visual and impossible close-up magic.

On this DVD/Video John Bannon teaches the best routines from his best selling book “Impossibilia: The Magic Of John Bannon.” The routines taught on this program are currently being used by many of the leading close-up magicians. These are the routines that gave John a worldwide reputation. You will immediately add many of them to your working repertoire.

Routines performed and explained:
►Shriek Of The Mutilated: A visual flash restoration of a torn piece of cigarette paper.
►Stranger’s Gallery: A selected card matches three prediction cards which visually change to odd backed colored cards. As a kicker ending the entire deck also changes its back color.
►Play it Straight (Triumph): Bannon’s outstanding no-sleight triumph routine where all the cards of the selected card’s suit remain face up after three fair shuffles.
►Vacuum Packed: A quarter magically penetrates a small sealed glass bottle and is visually removed through its tiny opening.
►One is the Onliest: A one-coin routine where a signed borrowed Quarter vanishes, appears, and changes into a jumbo join. The signed coin is finally found in an impossible location.

►Shock Treatment: A selected card and a thought-of card are found under impossible conditions. The selected card is counted to by the spectator and the thought-of card is found in your pocket.
►Heart of the City: A selected signed card is lost in the deck. A second selection matches your three predictions. The signed selection is now found in a sealed envelope that has been in full view the entire time.
►Directed Verdict: A spectator cuts the deck into four packets. The spectator turns the top card of each and shows them to be aces.
►The Birnman Revelation: A visual instantaneous production of the four aces.
►Shanghai Surprise: A half-dollar vanishes, appears, changes to an English penny, the half is reproduced and finally both coins change into Chinese coins.
►Revolutionary Penetration: A Chinese coin is threaded and tied on a shoelace. The lace and coin are placed into a spectator’s fist and impossibly separate.
►Photo Logic: A small piece of photo paper is signed and placed in full view. A card is selected and a photograph is taken of it. An image of the selection appears on the signed photo paper.
►Return of the Magnificent Seven: Seven duplicate cards are shown and a card is selected. Each and every one of the duplicates now changes into the selected card. Everything is examinable.

Be the first to review “John Bannon – Impossibilia” Cancel reply