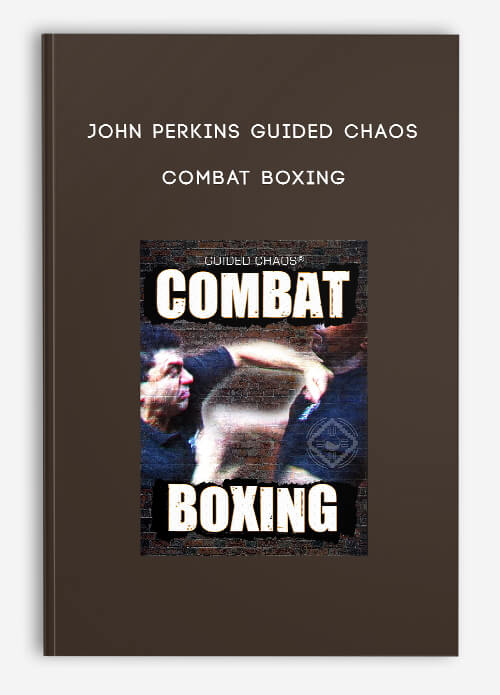 The best of 2 previous Combat Boxing seminars plus new material.

Ricocheting
Destructions
Multi-hitting
5 illegal fist configurations
Scooping
Clearing
and much, much more for saving your life…

Includes extensive training regimens combining both conventional boxing, closed-fist and elbow strikes, kicking and anti-grappling methods as well as some of the most comprehensive applications of Dropping Energy we’ve ever put on video. A jam-packed 3 hours and 20 minutes on 2 discs.

Combat Boxing is just another tool in the Guided Chaos toolbox and doesn’t replace anything.

Your sensitivity guides your chaos and your targeting while simultaneously adapting your own defense moment-by-moment to whatever attack the enemy throws. This is why the ability to improvise through the sensing of energy and movement is critical.

“May Be the Perfect DVD for Boxers and MMA Practitioners”

“Combat Boxing is a limited application of Guided Chaos (GC), but it might be the best DVD yet for helping someone with a background in Boxing, MMA or a traditional hard style martial art to understand how Guided Chaos (GC) can work for them. It is also filled with material a dedicated practitioner of GC will appreciate.

Combat Boxing does not use the full range of tools available in GC, but this limitation has several benefits. For the uninitiated, it makes the art easier to understand by limiting how much you have to absorb, and it makes it much clearer how GC relates to your current understanding of fighting. It also provides tools you can use today with what you already know. For example, this set has the best explanation of dropping energy yet, including demonstrations by professional boxing coach Andre Deveaux which show how boxers hit and from that point show you how to hit even harder by adding dropping.

The presenters, all experts at Guided Chaos (who include a combat experienced Marine Col., a street cop and forensics expert, a police captain, a professional boxing coach), move seamlessly from topic to topic.

There is so much material in this set that I will just touch on a few of the topics covered.

The material on dropping (how to hit hard) alone makes this set a must have for anyone interested in effective self defense. When you hit, it will be a solid hit.

The drills and explanation of long step hitting are well done and deceptively simple. It is like unlocking the code to fading and angles in boxing. This has improved my game a lot. My training partners have a much harder time seeing the hits coming and even when they do, they have a hard time getting out of the way. You will hit more often and be harder to evade while staying out of your opponent’s way.

Hidden in the section on arm conditioning at the end of DVD #1 is a fabulous slowed-down exchange where John Perkins explains what he is doing and why. Watching this section may be one of the most accessible ways for someone who has never directly experienced GC to “get” the basic idea. It comes across clearly because the methods Perkins uses are limited in a way typical GC practice is not.

The second DVD starts with how to use combat boxing against a grappler. This section is a goldmine of information. The explanations alone are good, clear and direct, but the experienced viewer who watches (and re-watches) this section with care will be rewarded with a lot of detailed understanding. I’m not sure how they managed to get so much into what looks like a casual and spontaneous exchange (on a side note, the ground fighting and slam bag DVD sets cover this topic in a complimentary way–well worth watching together). Not all of this can be used in MMA (although a lot can), but all of it is very good for self defense.

The section on entries fills an important gap. You will find bits of information on entries in the book Attack Proof and other DVDs on GC, but this section brings together material in one place and covers it better.

If you don’t already know GC, you’ll find that CCUE is well explained, a great alternative entry using “answer the phone” is presented, and several drills and variations on the practical applications of dropping to recover balance are presented.

Master Trainer and Police Captain Barnett presents a simple drill that you can use to recover stability (such as after being knocked back), and a number of variations are presented.

I have only touched on a few of the dozens of sections in this DVD set, but that should be enough to give you a sense of the type of material covered.

The camerawork is amazing. In a seminar setting, they have managed to get perfect sound, great angles (the camera operator must have a deep understanding to seamlessly get the camera at the right angle to see the important details). They seem to have outdone their previous outstanding work under what appear to be more difficult conditions.

The editing is at the very high level I have come to expect from the GC DVDs. There is no fluff here, just hours of pure content.

The Combat Boxing set is not as detailed in beginning level explanation as Companion Parts 1 and 2, but it may, in some ways, be more clear for a boxer or MMA fighter or traditional hard style martial artist.

Compared to The Attack Proof Companion Part Three–which is the most comprehensive and my all time personal favorite martial arts DVD, it is not nearly as detailed and the content is more limited. But “Combat Boxing” adds a lot of material that is not found anywhere else.

As John Perkins points out in this DVD set, if you are strongly trained in using your fists (as a boxer, MMA fighter, etc.), the transition to open hands will be challenging and it is best to build on what you are already good at (and may be committed to) so that you can best use those skills in self-defense. If this describes you, Combat Boxing might be better as a starting point (with Parts 1 and 2 and the book Attack Proof – 2nd Edition) and add Part 3 later.

Gordon Ryan – My Evolution Your Revolution

Henry Akins – Inside the Closed Guard