Ken Wilber – The Religion of Tomorrow 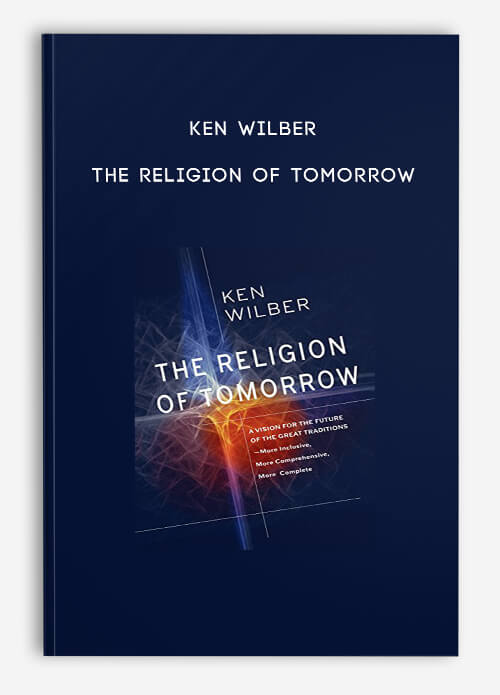 Ken Wilber – The Religion of Tomorrow

A single purpose lies at the heart of all the great religious traditions: awakening to the astonishing reality of the true nature of ourselves and the universe. At the same time, through centuries of cultural accretion and focus on myth and ritual as ends in themselves, this core insight has become obscured. Here Ken Wilber provides a path for reenvisioning a religion of the future that acknowledges the evolution of humanity in every realm while remaining faithful to that original spiritual vision. For the traditions to attract modern men and women, Wilber asserts, they must incorporate the extraordinary number of scientific truths learned about human nature in just the past hundred years—for example, about the mind and brain, emotions, and the growth of consciousness—that the ancients were simply unaware of and thus were unable to include in their meditative systems. Taking Buddhism as an example, Wilber demonstrates how his comprehensive Integral Approach—which is already being applied to several world religions by some of their adherents—can avert a “cultural disaster of unparalleled proportions”: the utter neglect of the glorious upper reaches of human potential by the materialistic postmodern worldview. Moreover, he shows how we can apply this approach to our own spiritual practice. This, his most sweeping work since Sex, Ecology, Spirituality, is a thrilling call for wholeness, inclusiveness, and unity in the religions of tomorrow.

Read an excerpt from The Religion of Tomorrow here.

“Ken Wilber is a national treasure. No one is working at the integration of Eastern and Western wisdom literature with such depth or breadth of mind and heart as he.” —Robert Kegan, Professor of Education, Harvard University Graduate School of Education, and author of In Over Our Heads

“When Ken Wilber’s thought walks through your mind, the door to the next higher level becomes visible. Anyone seeking to update the wisdom traditions of their lineage needs his reality and consciousness maps. The kabbalah of the future will lean on Ken’s work.” —Reb Zalman Schachter-Shalomi

“Wilber explains in detail how integrating the knowledge and spirituality that humans have developed over the millennia—in fields as diverse as science, psychology, and religion—creates what he calls a Fourth Turning that can lead humans to a new wholeness. As this wholeness expands, he writes, society will achieve new levels of compassion, peace, and inclusion. . . . This ambitious faith vision synthesizes a vast amount of information. . . . While traditions such as empiricism and Eastern and Western religions have each privileged only one form of knowing, Wilber contends that when people confront their shadow sides and spirituality becomes an integral part of all knowing and being, humankind will leap forward—and this book hopes to guide us along the path.” —Publishers Weekly

“The religion of tomorrow, according to Ken Wilber, will not be one religion, but all religions guiding their respective constituents toward oneness with Ultimate Reality. This book is Ken Wilber’s comprehensive synthesis of all the elements that make for human development from the Big Bang through the course of material and biological evolution. The recent discoveries of science, especially in the areas of developmental psychology and historical criticism, as well as mystical experience, have enabled him to bring together contemporary science, the wisdom of the world religions, and an integral presentation of the human condition with all its potential. The endless complexities of the evolutionary process gives way to a sublime simplicity, culminating in the spiritual and integral evolution of the human person toward unity with That Which Is.” —Thomas Keating, author of Open Mind, Open Heart

Get Ken Wilber – The Religion of Tomorrow with Digitdl.com

Relaxing into God by Miranda Macpherson

Awakening the Power of Your Breath by Gay Hendricks, Ph.D