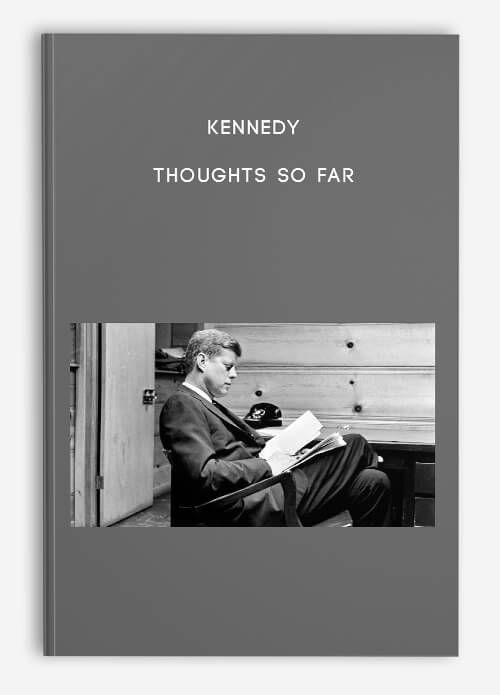 Thoughts So Far
by Kennedy

Over 30 effects, routines and essays from Kennedy’s mind. All of the effects within have been tried and tested on real, paying audiences. This material has gained great praise from top professionals around the world. This book contains “no filler” according to Richard Osterlind. Inside you will find: Chair predictions, playing card mentalism, dual reality and pre-show principals and subtleties, two person telepathy effects, metal bending all tried and tested.

“Obviously someone who knows how to respect and entertain an audience.”
– Leo Boudreau

“I always read the back of a book first and often wondered if anyone else did. Obviously you do but would you rather not know what Richard Osterlind has to say about this book…? He’s written the Foreword.

When Kennedy first approached me and told me that he had a few ideas that he had written down I was intrigued. When the email came through with over 200 pages I was surprised. When he kept sending additional routines and pages every other day I was more than surprised: I was amazed.

Now it’s your turn.
My first love is mentalism. I consider myself fortunate to be the first to read Kennedy’s book. From the first effect – Subliminal Summer – I was hooked. I love ‘Sitting on Rose Petals’ and the subtlety of ‘The Hand’.

‘Open Transmission’ was performed in a competition and won first prize.

Every effect deserves a prize.

It gives me great pleasure to help to introduce you to Kennedy.”
– Martin Duffy

“When it comes to creating effects, Kennedy’s ideas are always fresh and inspirational. Within these pages there are some real gems; a lot of thought has been put into this work.”
– Michael Murry, creator Beyond ESP

Get Kennedy – Thoughts so far with Digitdl.com

Be the first to review “Kennedy – Thoughts so far” Cancel reply