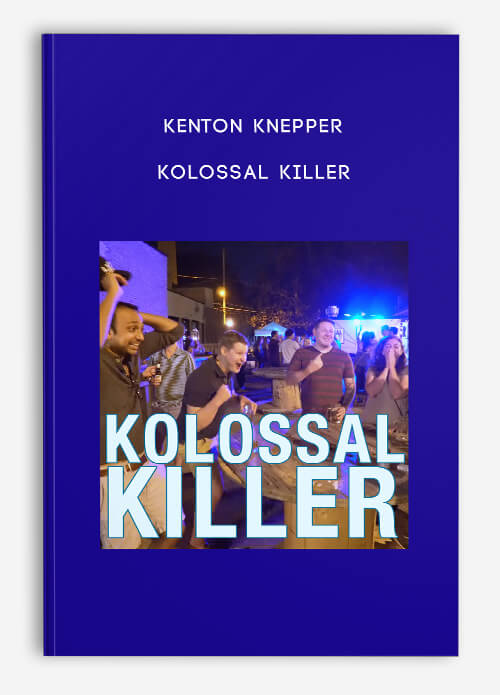 This set now includes a special hour video talk and demonstration with some of his students long-distance.

You get this hor long video talk, plus all the details to make Koloosal Killer all it can be. This video is from a live talk, unedited, so you can see everything, imperfections and all.

Kolossal Killer has long been one of Kenton’s favorite and most beloved creations. Unfortunately, many versions sell for over one hundred dollars… Not any more!

What is Kolossal Killer? Spectators just NAME a playing card, and you have the correct card in your wallet! YOU ARE ALWAYS CORRECT! It is the ultimate card “out” for close-up work. A spectator can mess with you all they want – RELAX – you can still produce a playing card from your normal wallet, as absolute proof that you knew their card all along!

Kolossal Killer has become a classic piece of mentalism as well – used by such pros as Larry Becker and Jeff McBride. It’s a full blown stage effect, with nothing but the minds of the audience and your everyday billfold!

Simple, direct, awe inspiring magic and mentalism – the kind you have come to expect from Kenton Knepper.

Kolossal Killer has become a true classic of mentalism and magic. Its effect and method are legendary. Killer has been performed on television, stages all over the world, at The Magic Castle in Hollywood, and in bars and living rooms – all to staggering effect.

This stunner couldn’t be easier or more diabolical. Only a very select few have been privy to Kenton’s original version of Killer – until this release. THIS IS YOUR CHANCE.

Get the complete original work with all the devious touches in this manuscript (just add your own billfold and cards). Forever more you will have a truly ground-breaking reputation maker, not “up your sleeve”, but in your own wallet.

PLUS order now and get an amazing Bonus Presentation and Method.

David J. Greene’s Kolossal Predicition almost ensures a standing ovation and makes Kolossal Killer play in large stage situations with even more happening in the midst of the audience. An additional kicker may be had – right out in the middle of the audience – with this version. Get this special bonus FREE, for your eyes only, when you order Kolossal Killer PDF direct from us below.

Just when you thought it was safe to put away your wallet… Fans of “The Original Kolossal Killer” – look out!

“How on earth did you ever manage to top yourself and Killer? Fantastic!”

“Any number of these routines alone is worth the price you are asking. Are you trying to make Magicians seem REAL again? You’re doing one heck of a job!”

Killer Konceptions bumps Kolossal Killer up to the next level.

Here is a sample of what is in this remarkable work:

PLUS sections on new tips, wallet arrangements, no wallet versions, mental force versions, and a ten page BONUS SECTION FOR NEW COMBINATIONS OF KILLER WITH K.E.N.T. too.

How could anyone improve on the Original Kolossal Killer manuscript? How do you top what many performers already consider “The Ultimate”? It does seem impossible, but now picture this:

This is NOT the same old thing. In fact, some of these routines are being used by others to prove that what they do is “REAL”. Heck, there is even a contribution from a Russian psychic. We’re not kidding around here.

This is THE most powerful stuff with “Killer” ever… These are truly the modern Killer Konceptions.

Find out the secrets and routines that the pros are screaming about, and get all the material in this over 100 page ebook, for a Killer price…

K.E.N.T. is a wild mix of principles making for a REAL solution to mind reading. This looks like the REAL thing…

This has become an oft-referenced classic. Now get the original version PLUS new additions by Sean Waters, David J. Greene and more. This new version radically expands the possibilities of the original.

Please read the following carefully. All we say here is TRUE.

Whether you are a close-up performer or a mentalist that plays it seriously, K.E.N.T. is a must have for you.

Kenton calls K.E.N.T. “One of two tools I rely upon for close-up work of any kind, magic or mentalism”.

K.E.N.T. is the creation of Irish magician and mentalist John Mahood.

IMAGINE… A wise guy pulls out his own deck of cards and demands that you prove your abilities. He wants you to prove yourself, without touching the cards, without writing anything down, without others helping. NO touching, NO marks, NO sleight of hand of any kind.

With K.E.N.T. you tell the spectator to make it tough on you and think of one of a few cards he himself removes from his own deck. You never see these. You instruct him how to focus upon his thought of card and you NAME HIS CARD to the degree that he freaks out and swears you are the REAL thing. He dares you to tell him what his card is, and that is exactly what you are seen to do.

This friends is a true mindblower. It is POWERFUL stuff. But it is not for everyone. This is as close to real mind reading as you can get. Like real mind reading, you will at very rare times, miss. You should know this up front. K.E.N.T. is for performers. For many real performers, given the impossibility of this situation, this is not much of an issue. You would likely fail anyway, so why not have the tools to usually win out instead? Yet we wanted you to be aware of this possibility. Add Kolossal Killer to the mix, and you will do this and never fail. In an effort of complete disclosure, the effect is you name the entire card. The reality is you name the name or number of the card, not the suit generally. But due to the psychology used, it appears you have named not only the name, but the suit as well.

You should also know that this is based upon English and American English as well as American playing cards, so this may make a difference to you. If you and the people you perform for will speak in English generally, then this is great for you. If not, this may not be perfect for you. You would surely have to make a fair amount of adjustments to be able to use the basic idea in other languages. We like to be as clear and open as we can about such things.

With that in mind, this and “Killer” Kenton calls his “lifeblood of close-up and mentalism” with cards, and we have had satisfied English-speaking clients the world over.

K.E.N.T. is also a must have for the close-up card worker who faces the type of spectator that challenges you to find or tell him his thought about card. NOW YOU WILL.

For the mentalist who is asked to prove the “impossible”, this is a tool that must be in your arsenal.

With practice, you can perform K.E.N.T. over the radio, phone or Internet if you wish.

Once you have K.E.N.T.in your mind, you will need nothing else. Another person’s mind and their own deck of cards is all that is used. That and the special secrets explained in K.E.N.T. With the new bonus methods, you don’t even need cards…just a person’s mind!

We TOLD you this seemed like the real thing.

Includes how Kenton uses K.E.N.T. in a One Behind or One Ahead effect as well.

An amazing tool for a steal of a price. See for yourself. May take some guts and/or acting, but well worth it in our view.

These versions use actual suggestion…we kid you not.

BOTH of these bonus items, along with new prompts incorporated into the original manuscript and other notes make for an exciting new version of this important classic.