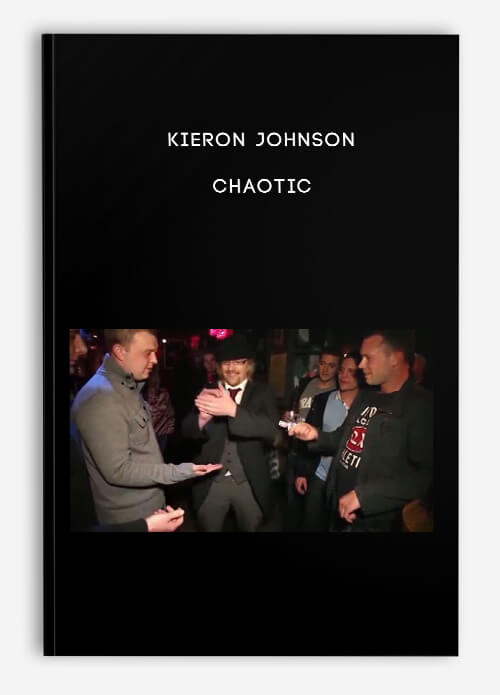 Chaotic is the eagerly awaited new release from Kieron Johnson. Kieron shot to the forefront of the magic community with his first release To The Max, a best selling magic trick of 2012. Journey along with Kieron as he performs and explains nine of his favourite magic tricks from his working repertoire. Each magic trick has been thoroughly tested in front of real laypeople from real world.

CIO – This is Kieron’s version of the classic of card magic, the Card in Orange. A playing card is selected a corner is ripped off and kept by the spectator. The chosen playing card vanishes and reappears inside an orange! The card is matched up with the corder that the spectator tore off themselves and it is a perfect match! Keep your eyes ‘peeled’ for this one!

Lollypop – This magic trick is Kieron’s opener, a lollypop appears from a flash of flames! Unique, visual, to the point magic. This can also be lengthened into a magic trick where the production is the climax to a prediction.

Stop Kicking Me – this is a perfect amalgamation of classic thinking and new age technology. A video is shown on your mobile phone, the image is of you, the magician, holding a face down playing card. A playing card is then freely selected and then the video is played. The video is un-paused and it shows the playing card being turned over, it matches the selected playing card perfectly!

Borrowed Phone in Ballon & Wallet– You begin by borrowing a mobile phone from your spectators and proceed to cause it to penetrate a balloon! As if this isn’t weird enough the balloon is burst to remove the phone. The parts of the balloon are rubbed together and they mysteriously heal! At this point the phone vanishes completely and is found inside your wallet, which has been on the table! This is going to get you repeat bookings!

Chaotic FKS – One of Keiron’s specialities is fork and spoon bending. This routine is his version of this worldwide phenomena. Within one phase the spectator holds a fork in their hands and it twists on its own, this is one crazy moment of magic!

Transcend – This is one of the routines on this DVD that has magicians going crazy! A spectator’s selected playing card rising from a deck has been a classic of card magic for a very long time. With Keiron’s unique take on this classic the deck is sealed away from the environment inbetween two glasses. The selected playing card (no forces) rises from the deck completely under your control whilst being sealed inside the two glasses.

Bigger – This is Keiron’s Sponge Ball routine, this magic trick is perfect for close up Kieron’s unique take on the Sponge Balls that can play close up or on stage

The 5 Rules of Magic – A fast and funny opening sequence, packed full of great nuances that work incredibly well in a working situation.

Credit Crunch – A unique way to reveal a chosen playing card on your actual credit card!

The Devils Triumph – Kieron’s version of the classic of card magic Triumph is unlike any other!

Get Kieron Johnson – Chaotic with Digitdl.com

Be the first to review “Kieron Johnson – Chaotic” Cancel reply

Welcome to the Powerful, Passionate and Fabulous