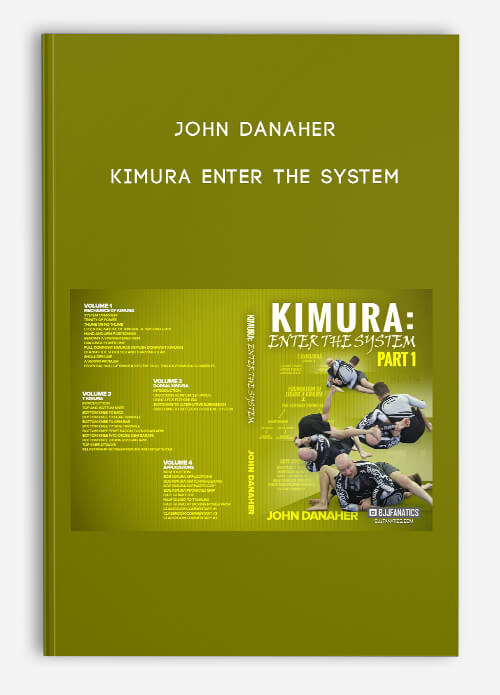 If you talked to the one hundred most knowledgeable grapplers in the world and asked them, “Who would you most like to learn grappling from?” ninety-eight, ninety-nine, or maybe even all one hundred of them would give you the same answer: John Danaher. There is just no equal.

“The Kimura System” from John Danaher: The Most Sought After Grappling Instructor On The Planet
John helped coach Georges St Pierre and Chris Weidman to UFC World Titles. Garry Tonon has become a 3x ADCC competitor and a grappling Icon
John has guided guys like Eddie Cummings and Gordon Ryan to stardom in a fraction of the time that it would take ordinary people
The Kimura system John teaches is excellent for both Gi and No Gi and applicable for Self-Defense
This system will change your perspective on Jiu Jitsu
Kimura Everyone

John Danaher is the most sought after Brazilian Jiu Jitsu instructor on the planet and there is a reason for that.  John simplifies Jiu Jitsu by creating systems and organizing easy to follow curriculum’s.  This is your chance to develop a lethal Kimura system.

The Kimura is one of the most misused techniques in grappling.  Most don’t even get the basics right

John Danaher doesn’t believe in fighting fair…  He only wants to compete when he or his killer DDS (Danaher Death Squad) have a big advantage. The Kimura itself is a big advantage..

The Kimura has also been referred to as the Double Wrist Lock in Catch Wrestling.  This position has been utilized in martial arts for over 500 years.  The name “Kimura” was attributed to the hold in Brazilian Jiu Jitsu when  Masahiko Kimura, the judoka defeated Helio Gracie in a grappling match, by way of gyaku ude-garami, now known as “The Kimura.”

The name has stuck within the Brazilian Jiu Jitsu community and the position has been revered as one of the best positions in grappling.  The Kimura has an incredible versatility factor due to the fact that it can be utilized in both Gi and No Gi and it is an extremely popular hold in MMA.  There have been countless UFC fights finished by way of Kimura.  Mastering this position will give the Jiu Jiteiro a weapon that can be used in all competition rule sets. Below we see John Danaher’s student, Georges St. Pierre utilizing the Kimura in the highest levels of combat.

The Kimura as a Position

Although the Kimura is primarily perceived as a submission, it can be much more.  The Kimura is one of the best methods of control and it is an excellent position because of the versatility.

A person skilled in the Kimura can use this position to sweep from the guard, to pass from the top and to defend themselves from countless takedowns.  This element of control can be attributed to the fact that you have 2 on 1 control.

One of John’s big principles centers around never getting stuck in a battle of strength: Your 2 arms vs. his 2 arms.  If he wanted his guys to win these battles he’d have them lift weights all day and not bother with technique.  John always chooses technique and his methods are obvious: only however, he has revealed them.  When you are stuck 2 arms on 2 arms, you have an advantage that most ignore… the power of your legs.  When you use your legs to assist in a Kimura, you have a massive advantage that virtually no one can overcome

In this instructional video series you will not only learn to master the kimura as a submission, you will also learn how to control and dictate the match by using the Kimura.

You will be able to sweep your opponents, stop their pass, retain your guard, and pass their guard all by utilizing the Kimura.  Another massive benefit to being able to master Kimura’s is the fact that you will have opportunities to chain together several submissions.

The Kimura can be the gateway to much more attacks.  You can use the Kimura to set up arm locks, triangle chokes, back takes, wrist locks and much more.  One of the biggest problems people have is that they are one track minded.  Once they secure the figure four control of the arm, they only think of the classic shoulder lock from the Kimura.

John Danaher is here to open your mind and show you that this is only the beginning of the end for your opponent.  If you secure a figure four Kimura lock on your opponent you can now use it to do much more then you imagined.
Using the Kimura as a Reversal and Submission
1

John Danaher has secured a Kimura lock as his opponent was establishing side control.  By manipulating his arm, his opponent will be forced to give up their position or tap.
2

Utilizing his control over the arm, John is simply going to change the direction of his hips to sweep his opponent. Notice in the previous image, he was on his right hip, in this image he is changing to his left hip and rolling his opponent while maintaining his grip.
3

Notice the subtle differences between this image and the last.  John has now brought his opponent’s wrist to the middle of his back while bringing his own elbow parallel with his opponent’s rib. John keeps the elbow of his arm controlling the wrist glued to the mat.  He has also brought the leg nearest to his opponent’s head directly underneath his opponent’s head so that they cannot put their head or shoulder back on the mat.
5

Now John is in an excellent finishing position.  He has finalized many of the factors necessary to finish the attack.  John has thrown the leg nearest to his opponent’s head over the head.  He is using his right elbow has a base along with his legs and he has changed the placement of his left arm and brought it very close to his opponents elbow to tighten everything.  Notice the difference in the placement of Johns left arm between this picture and the last.
6

At this point his opponent is going to tap.  He has brought his weight over his opponent while maintaining all of the control points he was utilizing in the last image.  Now John will slowly bring his opponents wrist farther up the center of his back and get the submission.  Notice that Johns right elbow is still glued to the mat and he is forcing his opponents hand to stay on the mat as well.

Get Kimura Enter The System by John Danaher with Digitdl.com