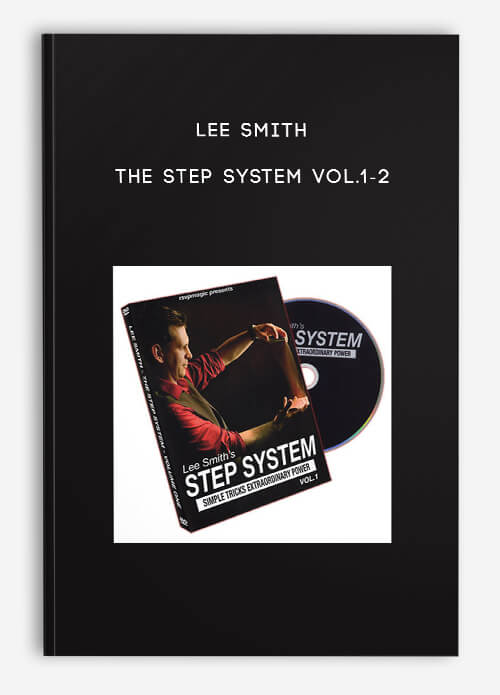 Welcome to ‘The Step System’ the brand new two disc set from UK magician Lee Smith. So, what is ‘The Step System’? Well it stands for Simple Tricks Extraordinary Power and proves that YOU can get fantastic reactions and make a great living performing effects that really are simple to do. The reactions on these DVDs prove it!

Ice Breaker – Lee’s 3 Phase opening routine. Cards jump from hand to hand, vanish and appear in impossible places! Included is an in depth discussion on character types for different audiences, approach and much, much more.

Walkaround 2 Cards to Pocket – Two cards are lost in the deck, then found and then they swap places. Snappy, fast and a real attention grabber. Utilizes the Ollie Mealing ‘Switch Trick’, one of the best glimpses ever! Worth the price of the DVD!

Trans-box-ition – One of Lee’s signature tricks being explained for the first time. An awesome routine in which a card jumps under the card box not once but twice and even escapes a spectator’s hand. A third phase ends with the entire deck under the box. Best of all its easy to do!

You Keep Mine – A superb multi-phase routine that ends with the spectators signature jumping from their card to one that has your business details on the back. The perfect giveaway that’s sure to get you more bookings.

Bold Business – An amazing feat of mind power. Leave the spectator thinking you really can read minds! A miracle using nothing more than a marker pen and some business cards (again worth the DVD).

Third Degree – Three cards are chosen, one even imagined. All three are revealed in progressively harder ways until the magician reveals that the thought of card has been in their hands right from the start. A masterpiece of audience management and psychology.

Just Think – You predict a card that the spectator merely thinks of and repeat the feat for an amazing kicker ending.

Business Lunch – Lee’s preferred handling for the Out to Lunch principle, leaving the spectator with the best memento they could have, your business card. The ultimate giveaway routine that’s sure to leave a lasting impression with your audience.

Key To Amazement – A self-working miracle where a thought of card is found under seemingly impossible conditions. This will freak out magicians and lay people alike!

Crazy Cuffs – A classic of magic explained. A borrowed ring jumps onto the band for a kicker ending.

Coming Together – A performance only of Paul Green’s wonderful effect where two signatures end up on the same card. If you like Anniversary Waltz you will love this. Watch Lee’s take on this for Walkaround performances.

Fifth Element – Lee’s take on Paul Harris’ ‘Whack My Pack’ plot. Sure-Fire and plays great to the largest of groups.

Bonaces – A brand new four ace routine, released here for the very first time! This is a multi-phase routine that you will learn and use!

Strike Two – Taking an old classic and bringing it right up-to-date, watch as Lee gets screams and gasps with this multi-phase lighter routine explained in complete detail. Another routine that you will use!

Get Lee Smith – The Step System Vol.1-2 with Digitdl.com

Be the first to review “Lee Smith – The Step System Vol.1-2” Cancel reply