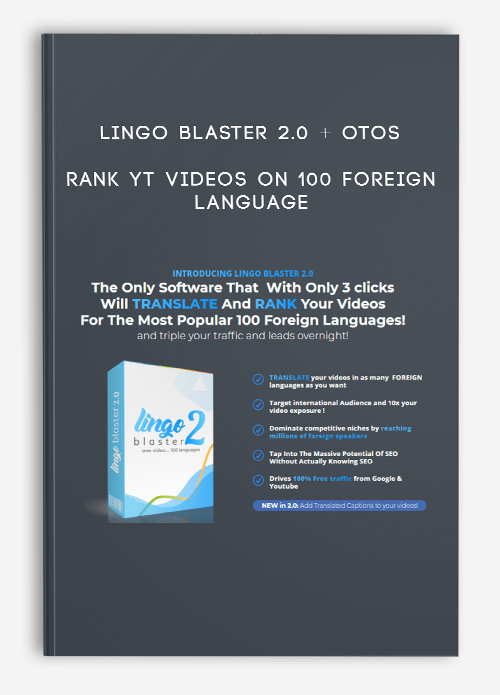 The Ultimate. video marketing software. The Only Software That With Only 3 clicks Will TRANSLATE And RANK Your Videos for most popular 100 foreign languages. Triple your traffic and leads overnight. More than that, Lingo Blaster 2.0 will make your videos change the title and description, depending on the foreign language of the viewer.

Features:
Target international Audience and 10x your video exposure,
Dominate Google & YouTube with your quality translated and subtitled videos,
Rank in over 100 foreign languages,
Dominate competitive keywords by reaching millions of foreign speakers,
Drives 100% Free traffic from Google & YouTube,
Tap Into The Massive Potential Of SEO Without Actually Knowing SEO,
TRANSLATE your videos in as many FOREIGN languages as you want.

Follow These 3 Steps And By This Time Next Week You’ll Have Targeted Traffic Bombarding Your Offers:
Step 1 – Select the Video: You just have to connect your YouTube account with our cloud-based software and select the video that you want to use,
Step 2 – Select the languages: Choose the languages that you want to target. With only one click LINGO Blaster will automatically translate your video details. Your video will show and index in all the selected languages,
Step 3 – Sit Back and Relax: In a short amount of time your video will start ranking and you’ll get a ton of FOREIGN TARGETED traffic from your videos.

Does this work in ANY NICHE:
Affiliate Offers: It is 100 times easier to rank in foreign languages than in English. While targeting English keywords you “fight” with hundreds of other marketers for that keyword… while all the FOREIGN traffic is RIGHT THERE searching each day after your offer,
Local Businesses: Just think about the restaurant, motel or airbnb around the corner. If their promo video would show up in all the foreign languages. Do you think he will get more tourists??. Heck yea,
Ecom and amazon: Do you think people are searching after rev*iew, unboxing or the “best price” for gadgets/products only in English???. You traffic will TRIPLE overnight guaranteed.

Everybody watches Hollywood movies:
Probably you are thinking right now. What good is ranking my videos for Spanish or German search terms. When my video content is in ENGLISH… My foreign viewers won’t understand what I’m saying and they will not take action…”. DON’T WORRY we have you covered. With Lingo Blaster 2.0 we will auto-generate captions in as many languages as you want with only 1 CLICK. “But will this work… will they watch my videos with captions??”. HECK YEA. Just think about it… everybody watches Hollywood movies or Netflix … with CAPTIONS.

You Need Translated Subtitles:
90% of your audience is not even speaking your language and can’t understand what you are saying. You are losing a TON of possible traffic and ranking opportunities if your video titles and descriptions are not translated and if you don’t have translated subtitles.

The best news is that You don’t even have to upload new videos:
With only a few clicks you’ll be able to translate your videos in over 100 foreign languages and tap into that HUGE untapped market. Your video will STAND OUT from your competitors, because you will be the ONLY one who will address to your viewers in their native languages… and because of that, your traffic will convert 10x better.
Your videos will start to rank for foreign keywords. It is 100 times easier to rank for let’s say “guitar lesson” in GERMAN than in English or to rank in FRENCH, SPANISH, PORTUGUESE, CANTONESE, and all the other 100 other languages.
Here is the thing, I don’t want to you to struggle, suffer and spend a fortune trying to do this manually. Paying for translations… for a single video will cost you at least $2000. You won’t have to pay that. I’m offering everything you need on a silver platter. All you’ve got to do is take action.

You ready to get to the next Video Marketing level:
Lingo Blaster 2.0 will translate the title&description of my videos in 100+ languages,
It will allow me to tap into 75% of the market that I ignored until now,
It will get me more leads and more sales,
It will DRAMATICALLY increase my rankings and traffic,
It is an unfair advantage and I will use it wisely,
I will get a tidal wave of highly targeted video traffic,
I understand that I will not have to pay the normal $97 PRICE.