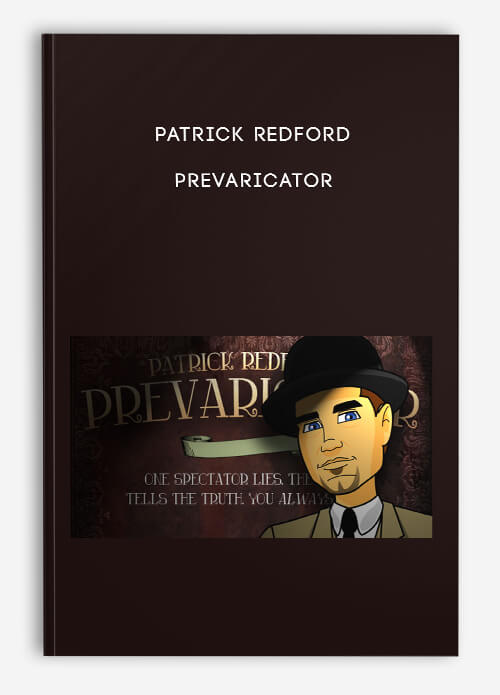 PRODUCED BY, AND EXCLUSIVE TO VANISHING INC.

Patrick Redford’s “Prevaricator” is more than a mentalism effect—it’s a concept that uses no gimmicks or props. Redford shares his diabolical method for detecting a lie, and discovering who is hiding a borrowed object and which hand they are hiding it in.

Two spectators are handed an object (say, a crumpled bill) and invited to play a game: one spectator will be the liar and one will tell the truth. While your head is turned, one of the two spectators takes the object. You, the mentalist, always know who the liar is, and which hand they are hiding the bill in. You can repeat the game indefinitely, and close by divining the serial number on the borrowed bill.

Prevaricator is unlike any DVD you have seen. Because the system involved requires a spectator, you are given a performance practice session, so you can practice along with Patrick Redford, in the comfort of your own home. This skill-building feature will allow you to perform “Prevaricator” with confidence, the first time you try it.

With a running time of 112 minutes and an ebook (included on the DVD) tipping 100 pages (with contributions from Barrie Richardson, Gregory Wilson, Banachek, Ben Blau, Garrett Thomas, Paul Vigil and more), this is a package and a principle of enormous value.

Just some of the raves that we’ve already received from the best mentalists in the world:

I have known and eagerly followed the creations of Patrick ever since he was George (or is it the other way around?).thi His deep thinking on the Truth/Liar object location is of value to anyone who wants to grow from owning props to possessing power.
Michael Weber

This is one of the best ‘psychological magic effects’ in years! Direct, simple, and baffling.
Patrick Kuffs

Prevaricator and its extensions is one of the closest things to real mind reading… because it is. No gimmicks , no double talk or dual reality, it is what you would do if you read minds… because you do. Put your two cents in this miracle and sufficient practice and if you are not rewarded, I will personally pay for your investment. I have no stock or investment in this marvel of psychological control, but a deep respect for its method and presentation.
Marc Salem

For just a moment, forget about Prevaricator…forget about the effect, the method, everything—it’s just another piece of mentalism. Instead, focus on what you can learn about mentalism from Prevaricator, and then you will really have something.
Rick Maue

Most mentalists are looking of that ‘holy grail’ of mentalism. That one effect that is really magick, the one effect that is “real.” Patrick Redford has come as close as it gets when it comes to this with Prevaricator. One would be mistaken to think this is just a single effect. It is so much more than that, in this booklet you will learn tools that will help you in all your other mentalism presentations. Prevaricator hands you subtleties that will help you advance your artistic mentalist abilities get you thinking outside the box.
Banachek

I remember how Prevaricator struck me when it was first published. It came as a kick in the head. Though packaged as a modest little booklet, it packed a wallop. I hadn’t seen anything like it and hadn’t a clue why it worked. I didn’t believe it would work until I tried it. But work it does. I’ve used it successfully ever since in connection with my own truthteller routine for an extra kick and to rule out any logic puzzle. I’m thrilled that you’re finally releasing the long-awaited DVD and latest thoughts on this classic effect. They’re a godsend. I can’t wait to put this wealth of information into practice.
Leo Boudreau

It’s not often that I am sooooo badly fooled. If Prevaricator got me only once, it could’ve been lucky. Twice was impressive. But reliably over and over and over, it was downright remarkable!
Gregory Wilson

Get Patrick Redford – Prevaricator with Digitdl.com

Be the first to review “Patrick Redford – Prevaricator” Cancel reply