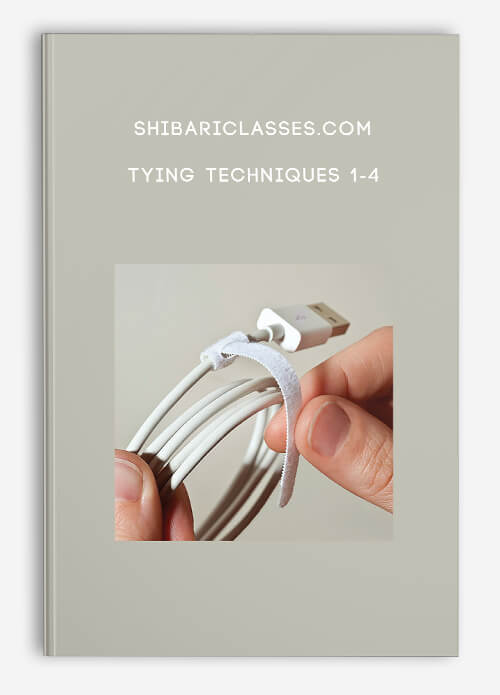 This is a discounted bundle containing all four parts of this series, saving you 25% over individual subscriptions. ‘Tying techniques’ turns conventional teaching methods on their head by moving away from the learn by rote method . In this series, we teach you how to use rope with maximum efficiency and to understand the basic ‘ingredients’ so you have a solid foundation to devise your own ‘recipes’ (ties).

Not only that but you will learn the essential engineering and aesthetic principals: The how and why behind what we do. This will allow you to tie confidently with flow and passion. This can only be achieved with an understanding of the language of rope. In our opinion, it is much harder to unlearn bad habits later. Often it is only with the highest level of teaching that one even learns that one’s technique is inefficient or faulty. Very few tutorials touch on the depth we cover since they are largely ‘painting by numbers’.

Esinem is a Japanese style bondage (shibari/kinbaku) artist who regularly appears at UK and international events such as Pride, Torture Garden, Erotica, Rubber Ball, Wasteland, Boundcon, Nuit Demonia and recently represented the UK at Japan’s first international kinbaku event, Toubaku. He is also known for his teaching both in the UK and internationally and as co-organiser of the London Festival of the Art of Japanese Bondage and BOUND, Europe’s premier monthly shibari event.

Over the last few years, he has been improving his skills in Japan with the help some of their best known and respected kinbakushi, Arisue Go, Osada SteveKinoko, HajimeKazami Ranki and, grand master of newaza, Yukimura Haruki. Whilst drawing from classical methods, his style is distinctive and epitomizes the art of communicating with rope, often departing from the typical serenity of shibari shows and flying in the face of tradition to produce some striking and unusual performances.

In addition, he has worked on various videos, e.g. Primal Scream’s 2013, artistic collaborations and photo shoots both on and off camera. He has been involved in projects providing inspiration for Tom Ford’s 2013 collection and, Raqib Shaw, an acclaimed artist who has exhibited at the Tate, Metropolitan and White Cube galleries.

He contributed to Rope, Bondage & Power, edited by Lee Harrington and is currently involved with a number of documentaries on kinbaku. He is also author of the first English language tutorial DVDs: ‘Japanese Rope Bondage: Tying people, not parcels’ .

Nina Russ is a London based, shibari performer, rope artist and educator. She became student of Esinem in 2011 and their collaboration gave birth to BOUND shibari night (2012) and ShibariClasses (2015). She had also the fortune to participate at workshops with different Japanese shibari masters, like: Kazami Ranki, Yukimura Haruki, Kinoko Hajime.
She has performed internationally, most notably at the London Festival of the Art of Japanese Rope Bondage and RopeFest in St.Petersburg. In addition, she participates in numerous artistic, fashion collaborations and local performances. Her passion for rope has lead her on a route of discovery of concepts, philosophy, aesthetics and benefits behind this Japanese discipline.
She sees shibari as an art form which creates deep connection between the participants and also aids personal development. Due to its martial arts roots, it brings self-discipline, efficiency, effectiveness and, thus, growth in confidence and awareness. She believes these skills allow a greater focus on the most important aspects: you, your partner and your shared experience.
Rope is simply a means of communication. She wants you to discover through her tying, the language of rope, which speaks directly to the mind and body.

Be the first to review “Shibariclasses.com – Tying Techniques 1-4” Cancel reply

Marnie Greenberg – Delete Relationship Stress And Pain On The Spot