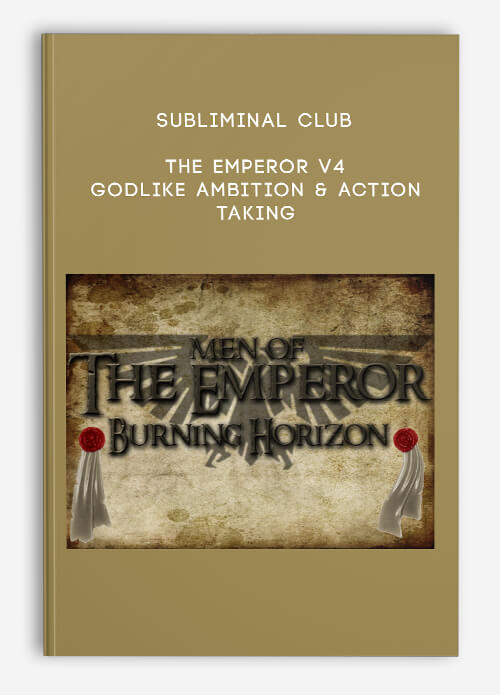 There are alpha males. Then, there are those that transcends all definitions and labels. These individuals are the true rulers of their lives and everything they do. EMPEROR will get you there. It’s designed for those who want more than just “success,” or “more respect.” EMPEROR is designed for those who will stop at nothing to become pure perfection and excellence. Forget what you THINK you know about your personal reality and limitations. Let EMPEROR teach how to create and rule your own personal empire. Now built with our proprietary QuantumTech scripting technology, EMPEROR v4 is the world’s most powerful alpha male subliminal.

What’s The Only Difference Between You and the Greatest Men That’s Ever Lived?

The answer is an EMPEROR’S MINDSET. A quality the greats always possessed, but you didn’t. Until now.

The EMPEROR CORE script contains some of the most BOLD, powerful, mind-blowing, and reality-bending scripting EVER. We can pretty much guarantee that no other subliminal producer will put as much hard-hitting, profound scripting as we did.

When used properly, EMPEROR will help you experience:

An extreme sense of personal power and pride, that you are the master of your reality and being.
That you are a highly valued person with the potential to become the greatest person that ever lived.
The sense that achieving incredible success, money and abundance are absolutely effortless to you, and will flow endlessly into your life.
The ability to easily manifest extremely profitable and lucrative situations, business and personal deals
Some of the most incredibly positive self-talk to constantly keep you motivated and ready to conquer
Romance, ROMANCE, ROMANCE! And sex, of course. Enjoy being able to choose between multiple romantic partners
And MUCH, MUCH MORE. We’re just scratching the surface — the EMPEROR Core set ALONE is over 60 pages.

Ascension:
See, we define “power” as your ability to assert your will upon the world when you please. That means, building the life you’ve always dreamed about, and exploring your own personal reality without any societal imposed mental hang-ups or limitations. Ascension will help you quickly dissolve all mental internal limits, and push you toward long-term success by increasing your sense of internal strength and power.

Feel like a highly valued, powerful individual at every level of your being
Develop an identity-level sense of deep, genuine, unshakeable self-confidence.
Become completely self-reliant: both mentally and emotionally.
Naturally generate an aura of charisma that resonates with others, compelling them to respect and admire you.
And more!

Mogul:
There are those, however, that desire more than just internal power. Some of us desire riches and wealth. Society tries to paint that as an issue, teaching people that money is inherently evil. As a result, you could be potentially placing artificial limits on your ability to acquire wealth. Ascended Mogul will help you break through those barriers and improve every aspect of your life where money and wealth are involved. Enjoy such benefits as:

Work superiors to taking notice of your increased efforts and productivity, leading to widespread recognition and promotions.
Long-term wealth generation ideas to suddenly materializing alongside a powerful, positive motivation to bring those ideas to fruition.
Prepare yourself for better financial and spending habits, like automatically and effortlessly limiting frivolous purchases and instead routing that money into a business, investment, or other wealth generation vehicle.
Discover whichever talents or skills you possess that you also enjoy engaging in, and learn how to monetize those talents for wealth generation.

Quantum Limitless Lite:
Long story short — we took the core scripting of Quantum Limtless (the world’s most powerful learning and productivity subliminal) and incorporated it into Emperor

Business is the activity of making one’s living or making money by producing or buying and selling products (such as goods and services).[need quotation to verify] Simply put, it is “any activity or enterprise entered into for profit.
It does not mean it is a company, a corporation, partnership, or have any such formal organization, but it can range from a street peddler to General Motors.”

October 2019 Blogging Blastoff by Its A Lovely Life

The League Of Extraordinary Minds from Rich Schefren

Get Stuff Done Like a Boss – Individual Package from Tiago Forte