The Teaching Company – History of the English Language

Category: Everything Else Tag: The Teaching Company - History of the English Language 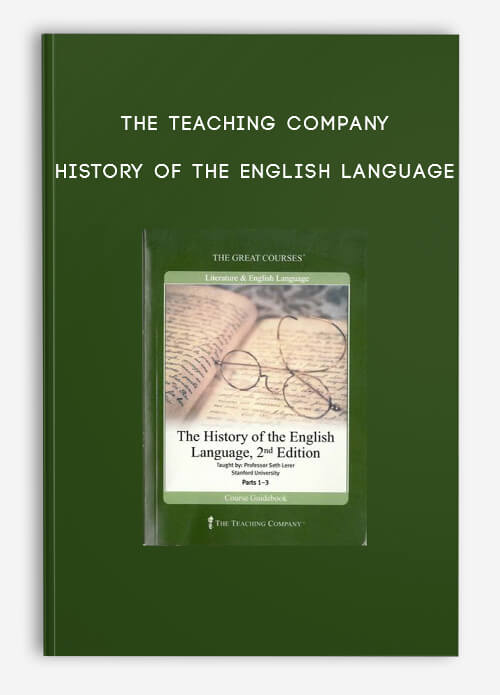 The Teaching Company – History of the English Language

Sixteen centuries ago a wave of settlers from northern Europe came to the British Isles speaking a mix of Germanic dialects thick with consonants and complex grammatical forms. Today we call that dialect Old English, the ancestor of the language nearly one in five people in the world speaks every day.
Hide Full Description

How did this ancient tongue evolve into the elegant idiom of Chaucer, Shakespeare, Twain, Melville, and other great writers? What features of modern English spelling and vocabulary link it to its Old English roots? How did English grammar become so streamlined? Why did its pronunciation undergo such drastic changes? How do we even know what English sounded like in the distant past? And how does English continue to develop to the present day?

The History of the English Language, 2nd Edition, is Professor Seth Lerer’s revised and updated investigation of the remarkable history of English, from the powerful prose of King Alfred in the Middle Ages to the modern-day sermons of Martin Luther King, Jr.

Throughout its history, English has been an unusually mutable language, readily accepting new terms and new ways of conveying meaning. Professor Lerer brings this second edition up-to-date by including discussions of the latest changes brought about through such phenomena as hip hop, e-mail, text messaging, and the world wide web.

Are you a logophile—someone who

Pauses over a word to wonder about its origin
Stops to consider if a phrase or word is “proper”
Savors a colorful idiom or slang phrase
Is concerned about the use—and abuse—of English
Is just plain curious about words?

Then you will find these 36 half-hour lectures endlessly fascinating and immensely rewarding.

Hear the Sound of English over the Centuries

The author of numerous authoritative books and articles on the English language and English literature, Professor Lerer is an expert who knows how to get people excited about their mother tongue, as evidenced by his many teaching awards. Washington Post reviewer Michael Dirda praised the first edition of this course as “justly popular,” and went on to applaud Professor Lerer’s style as “erudite without ever becoming dull.”

Professor Lerer captures your interest from the start of lecture 1 when he recites a series of literary passages in their conjectured historical pronunciation. The three quotations begin as follows:

To be, or not to be: that is the question

The first is the opening of Caedmon’s Hymn, the earliest extant poem in Old English, composed around the year A.D. 680. Most people are hard-pressed to see any connection to modern English, but you will discover that there are many hidden traces.

The second passage is from the prologue to Geoffrey Chaucer’s Canterbury Tales, written in Middle English in the late 1300s. This is recognizable as English, but with a mix of baffling vocabulary. You will find that many of the unfamiliar words are just slightly disguised versions of words we use today.

The last quotation, of course, is from Shakespeare’s Hamlet, composed around 1600. But you may be startled to hear Professor Lerer’s reading of this celebrated soliloquy, which hardly sounds like the pronunciation of modern British Shakespearean actors. That is because English in Shakespeare’s time did not sound like what we’ve become accustomed to hearing on the stage.

The Great Vowel Shift and More

From this core sample of English over the centuries, you begin your journey. Professor Lerer proceeds chronologically, beginning with the roots of English in the postulated ancient languages known as Indo-European, probably spoken 5,000 to 6,000 years ago by a group of agricultural peoples living around the Black Sea.

Never written down, the Indo-European languages were discovered in the 19th century when an English scholar noticed that certain words, such as the Sanskrit raj, the Latin rex, the German reich, and the Celtic rix, were similar in sound and meaning (they all mean king or ruler). These and other clues suggested that most of the languages from Ireland to India descended from a common language or group of dialects, which came to be called Indo-European. Germanic arose from this protolanguage, and Old English evolved out of Germanic.

Linguists have developed remarkable tools for charting how languages change over time. In this course, you will employ these tools to investigate four specific areas:

Pronunciation: As you can see from the Old English sample above, the sound of English has changed radically. The best known example is the Great Vowel Shift, a systematic change in the pronunciation of vowels that occurred in the 15th and 16th centuries. Professor Lerer’s reading of several lines from Shakespeare’s Richard III shows that the shift was not yet complete in the Elizabethan age.
Grammar and Morphology: Grammar describes the way words work together, and morphology describes their form, such as whether nouns and verbs are inflected. The evolution of such features is fascinating to observe, as in the Old English and Middle English expression methinks, where me is not the subject but rather the indirect object. The compound translates as “it seems to me.”
Meaning (Semantic Change): Words change meaning. Take the word silly, which comes from the root selig, meaning blessed. Over time, the word came to describe not the inner spiritual state of being blessed but the observed behavior of someone who acts foolishly. When reading an older text, beware that seemingly familiar words may not mean what you think.
Attitudes toward Language Change: What are we to make of the wide variation in language use across the people who speak English? The 18th-century English lexicographer Samuel Johnson wrestled with this challenge while compiling his famous dictionary. The debate is reflected in today’s debate over prescriptivism (the idea that correct linguistic behavior should be taught) versus descriptivism (the idea that linguistic behavior should only be described).

From English to American

Published in London in the mid-18th century, Samuel Johnson’s Dictionary of the English Language was the first reference work used as we use a dictionary today: as a source for everyday, individual questions on spelling, pronunciation, and grammatical usage.

Another influential dictionary figures prominently in the last third of the course, which focuses on English in America. In the early 19th century, Noah Webster compiled a dictionary devoted to America’s forthright and commonsensical relationship with the English language. Today’s differences between American and English spelling—for example, color versus colour, defense versus defence—are due to Webster. He also recorded American pronunciations and advocated that all the syllables in a word be enunciated: “necessary” and “secretary,” not “necessry,” and “secretry.”

Professor Lerer encourages you to step back and observe your own pronunciation. If you are from the South, do you pronounce the words pin and gem with the same vowel? Professor Lerer himself is from Brooklyn, but the sharpest elements of his accent were ironed out long ago by his mother, a speech therapist for the New York City schools. However, like many former dialect speakers, he can revert to his roots, and he demonstrates how he used to pronounce often and orphan the same way.

Experience a Great Civilization through Its Words

English has come a long way since those first Germanic settlers crossed the North Sea to Britain. The words you use every day are like archaeological artifacts connecting our age to theirs. To study the history of this wonderful language with Professor Lerer is to experience the literature, politics, culture, ways of thought, and world outlook of a great civilization through its most precious legacy: its words.

Get The Teaching Company – History of the English Language with Digitdl.com

Reginald A. Ray – AWAKENING THE HEART