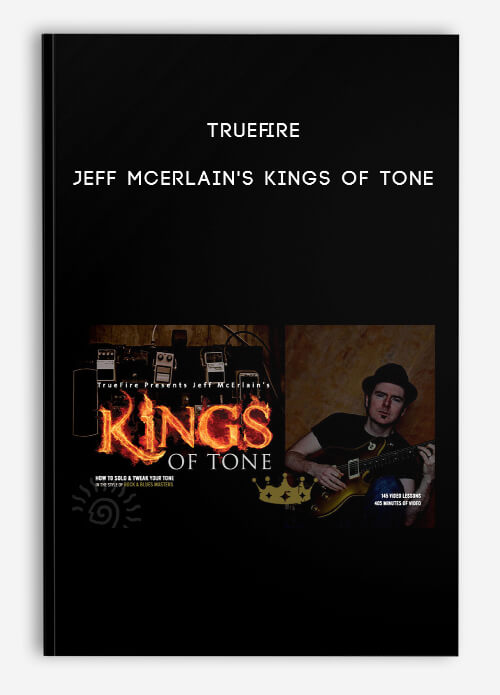 About Jeff McErlain’s Kings of Tone
Learn how to tweak your gear, touch and tone to sound like the masters

From the very first moment we plug in our guitar, we begin our quest for the Holy Grail of Tone. With an Indiana Jones-like tenacity we explore the digital and analog landscape attempting to uncover the quintessential combination of guitar, strings, amps, pedals and other assorted doo dads. Rarely do we succeed. In fact, sometimes it seems that no matter what we try, or what we spend, the prize we seek eludes us. Most of us spend fortunes on gear and various rehabilitative treatments for GAS, the obsessive compulsive disorder affecting most guitar players (the most effective cure being TUMS aka Time to Unload My Stuff).

One of the key revelations we experience along the way is that it’s not just gear that shapes tone; it’s the tactile interaction between our flesh and the guitar itself. Larry Carlton is a great example; without touching a dial or a pedal, Larry’s lines morph from clean, bell-like melodies to those sweet, singing, driven, lines he is so well-known for. Yes, he plays a $40k Dumble but really, it’s all about “touch” and he’d be the first to tell you that.

Assuming you’re willing to accept that “tone” stems from both gear and touch, then you just might be a click away from a treasure map to your Holy Grail of Tone. Kings of Tone examines twelve masters of tone revealing their gear and effects formulas (and how you can emulate same with your own gear) along with their singular approaches to “touch” and stylistic phrasing.

While our quest is ultimately about finding our own “voice” and signature sound, we must first study the masters, just as they studied those who came before them. Kings of Tone dissects the styles, touch, tones, amps, pedals, guitars and setups of Jeff Beck, Jimi Hendrix, Eric Clapton, Jimmy Page, Billy Gibbons, Dickey Betts, Duane Allman, The Edge, Angus Young, David Gilmour, Keith Richards and Mark Knopfler.

Your Professor of Tone is NYC session player and educator Jeff McErlain, whose standing-room-only workshops on the subject testify to his expertise stemming from years of tone exploration. “I hope to demystify the tonal qualities of these twelve players by sharing the insight I’ve gained over many years studying them and deconstructing their styles, touch and rigs.”

Kings of Tone is NOT about learning to play the signature licks of these masters (although you will pick up many that you will add to your bag). Rather, you will learn how to “channel” their respective tones, rigs, styles and approaches so that you can develop your own “sound” more intelligently and/or emulate these players’ tone when covering them in a live gig situation.

For each of the twelve Kings, McErlain walks you through a configuration of amp settings, pedals and other technical tweaks that you can use with your own gear to get you in their general ballpark tone-wise. Jeff then presents a series of lessons to convey the touch, feel and stylistic approach of the artist. Use this information to impersonate the tone of the artist or mix and match the gear and styling of different artists to innovate your own sound. Kings of Tone also includes tab, notation and Power Tab for all of the playing examples along with the practice rhythm tracks that Jeff used to demonstrate the examples.

Want to learn the ins and outs of tweaking amps and pedals? Yearning to learn how to play in the style of Beck, Hendrix, Gilmour, Clapton and the rest of the Kings covered herein? Ready to get a solid grip on the relationship between touch and tone? It’s all here in Kings of Tone!

Sonic Academy How To Make Uplifting Trance with Bjorn Akesson