Will to Power: The Philosophy of Friedrich Nietzsche

Category: Everything Else Tag: Will to Power: The Philosophy of Friedrich Nietzsche 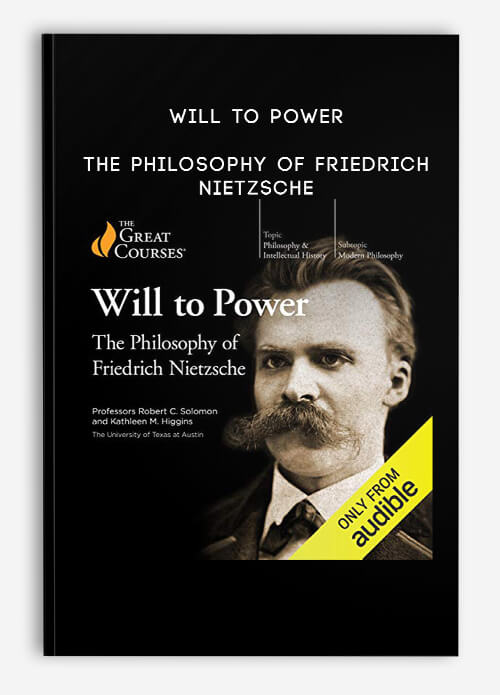 Will to Power: The Philosophy of Friedrich Nietzsche

“The Will to Power.”

Among shapers of contemporary thought—including Darwin, Marx, and Freud—Friedrich Nietzsche is perhaps the most mysterious and least understood. His aphorisms are widely quoted, but as both man and thinker he remains an enigmatic figure, “philosophizing with a hammer” and hurling unsettling challenges to some of our most cherished beliefs.

Who was this eccentric German genius? This lonely and chronically ill, yet passionate, daring, and complex seeker?

Was he a proto-Nazi, or would he have found Hitler despicable?
Who was this man who caustically attacked the Christianity of his day but who wept openly when he saw a horse mistreated in the street?
Why are his brilliant insights so relevant for today?
How did he become the most misinterpreted and unfairly maligned intellectual figure of the last two centuries?

Professor Robert Solomon is the Quincy Lee Centennial Professor of Business and Philosophy at The University of Texas at Austin and a member of the Academy of Distinguished Teachers.

He has received several awards for excellence in teaching, including a Fulbright Lecture Award and a Standard Oil Outstanding Teaching Award.

In his precise yet conversational style he weaves biographical detail, abstract analysis, and humor, constructing an engaging, well-rounded portrait of the most enigmatic, complex figure in all of philosophy. He is joined in many lectures by his wife and fellow Nietzsche scholar, Professor Kathleen Higgins, also of The University of Texas at Austin.
A Lonely Genius’s Quest

Nietzsche’s body of work has been enormously influential, but it consists of a hodgepodge of reflections, accusations, bits of psychoanalysis, church and secular history, advice to the lovelorn, moral reminders, and some forgeries created by Nietzsche’s nefarious sister.

To provide shape to Nietzsche’s thought, each lecture focuses on specific ideas that preoccupied Nietzsche while tracing the profound themes that give meaning to his work.

Lectures 1 through 3 provide a context within which we can better understand Nietzsche’s life and work. These are essential and foundational introductions to him. Professors Solomon and Higgins:

Debunk the myths, rumors, and misunderstandings surrounding Nietzsche. (They show, for example, that he was not insane, misogynistic, power-mad, anti-Semitic, or amoral.)
Connect his thought to that of his predecessors Socrates, Plato, Jesus, and Schopenhauer and that of his near-contemporaries Kierkegaard, Dostoyevsky, Marx, and Freud.
Investigate how Nietzsche’s method of explaining human beliefs and practices in terms of personality and character (as opposed to justifying them through reason) enabled him to refute Socratic assumptions, English utilitarianism, Christian compassion, and Schopenhauer’s pessimism.

The Death of God and The Birth of Tragedy

Lectures 4 through 8 explore Nietzsche’s subtle and complex critique of both religious belief and Greek rationalism.

What did Nietzsche mean when he declared “God is dead”? We see that Nietzsche did not seek to condemn true spirituality but to question the mindset that insists on eternity, that is obsessed with unity and coherence, and that demands predictability and justice in a world that is neither predictable or just.
We examine Nietzsche’s near-worship of pre-Socratic Greek culture and his championing of instinct, passion, and aestheticism.
We study Nietzsche’s first work, The Birth of Tragedy (1872), famous for its brilliant analysis of the creative tension between the cults of rational Apollo and ecstatic Dionysus in pre-Socratic Greece.
We see how Nietzsche contrasts tragedy, which accepts suffering and makes something beautiful out of it, with Platonic, Socratic, and Christian thought, which he accuses of trying to deny the meaning of suffering by invoking a superior, otherworldly life.

Lectures 9 through 11 focus on Nietzsche’s famous style, which deftly combines the majesty of the prophet, the force of the Homeric warrior, and the lyricism of the poet, but which nonetheless is rife with fallacies, inconsistencies, exaggerations, and scathing personal attacks.
Harsh but Insightful Criticisms

In lectures 12 through 15, Professor Solomon takes a closer look at Nietzsche’s harsh but insightful criticisms of the intellectual currents of his time—Christian moralism, evolution, socialism, democracy, and nationalism. Here we meet Nietzsche the “moral psychologist,” who revolutionized our understanding of the “human, all too human” motives that underlie our beliefs.

Is Nietzsche correct that “every philosophy is a personal confession and an unconscious memoir”?
Are pity and laughter just forms of dominance and power?
How much of morality is, in fact, a scheme to bring down one’s superiors through guilt? How do repression, religion, and rationalization assist in this scheme?
How does Nietzsche criticize previous ideals of love?
Is Nietzsche a powerful anti-nihilist? Is he correct in rejecting the utilitarian’s moral guideline “the greatest good for the greatest number” as a nihilistic rejection of life? (He says: “Man does not live for pleasure; only the Englishman does.”)
How does Nietzsche’s “morality of virtue” contrast with Judeo-Christian morality? And how does he argue that 2,000 years of Christianity enriches and spiritualizes “healthy” morality?

In Lectures 16 through 20, Professor Solomon pulls back and attempts to summarize Nietzsche’s preoccupations. In a nod (and a wink) to our times, he compiles “top-ten lists” of both Nietzsche’s favorites and his favorite targets. You will be intrigued to see who makes both lists! Also in this section, we encounter Nietzsche the historicist and Nietzsche the “immoralist,” and discover the source of his vitriolic personal attacks.

The final four lectures examine Nietzsche’s highly unorthodox “genealogy” of morality, as well as his most enduring image, that of the Ubermensch (super-man or over-man), and the notion of the will to power and “the eternal recurrence.” Because these concepts have been misappropriated as rationalizations for monstrous behavior, they are usually misunderstood. You learn:

How the will to power explains our need for self-expression
How the Ubermensch is an expression of the innate human yearning for excellence
How Nietzsche characterizes the alternative to the Ubermensch—the “last man,” who can quickly be sketched as the “ultimate couch potato” and the final fruit of utilitarian philosophy.

The “eternal recurrence” is Nietzsche’s powerful, personal test. If you knew that you would live your life again and again for eternity, is it the life you would will? In short: do you in fact love your life? This is not a nihilist’s question. It is a powerful call to full awareness and action in life.
Nietzsche’s Love of Life

As you make your way through these lectures, you’ll discover that Nietzsche, even at his most polemical and offensive, exudes an unmistakable enthusiasm and love of life. In fact, you’ll see that his exhortation to learn to love and accept one’s own life, to make it better by becoming who one really is, forms the project that is the true core of his work.

Get Will to Power: The Philosophy of Friedrich Nietzsche with Digitdl.com

Be the first to review “Will to Power: The Philosophy of Friedrich Nietzsche” Cancel reply